theteam@customersupport.care
0 Items
It’s a little challenging to work with at first since it’s a pretty sturdy steel product and joining the pieces together takes a little getting used to. That said, it’s a great looking product and I wouldn’t hesitate to order again if needed.

per metre – order just the length you require

Our high grade weathering steel has a unique look and naturally oxidizing finish.

Weathering steels are a group of steel alloys which were developed to remove the need for painting which form a stable rust-like appearance when exposed to the elements.

ORDER JUST THE LENGTH (per metre) YOU REQUIRE 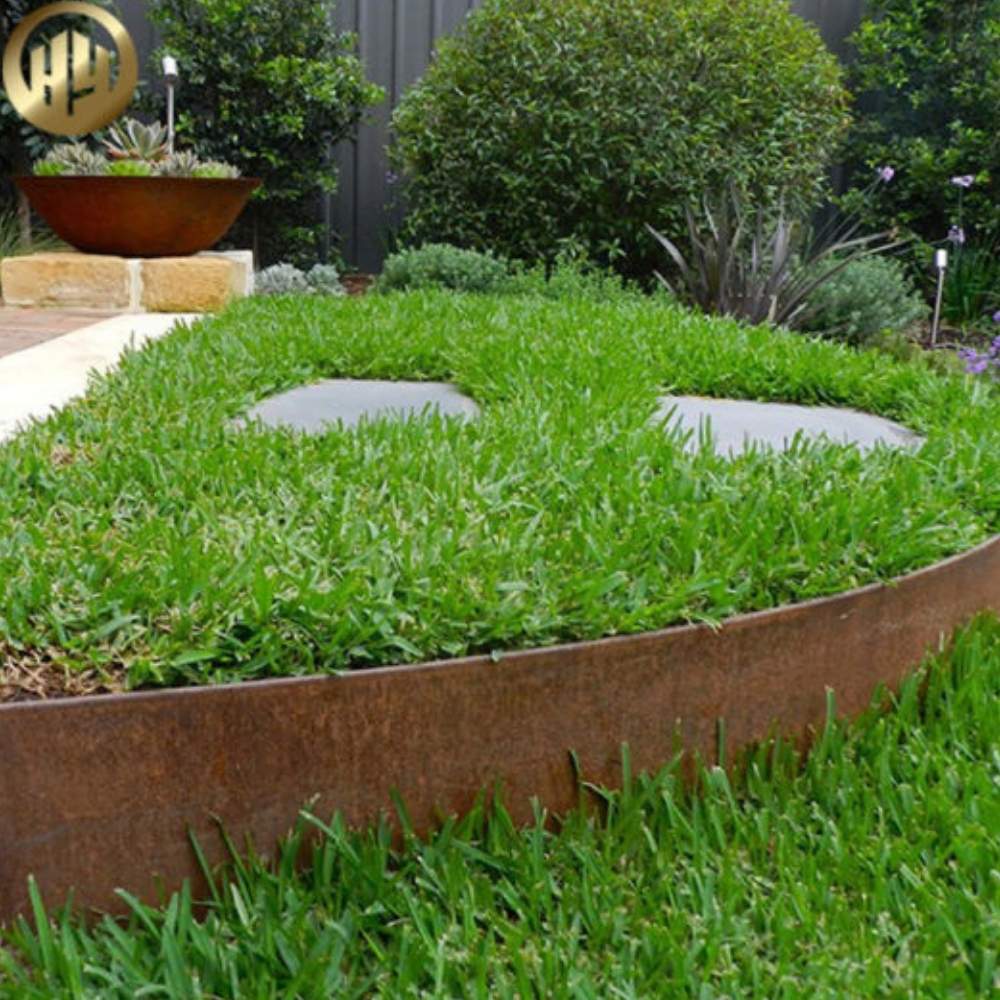 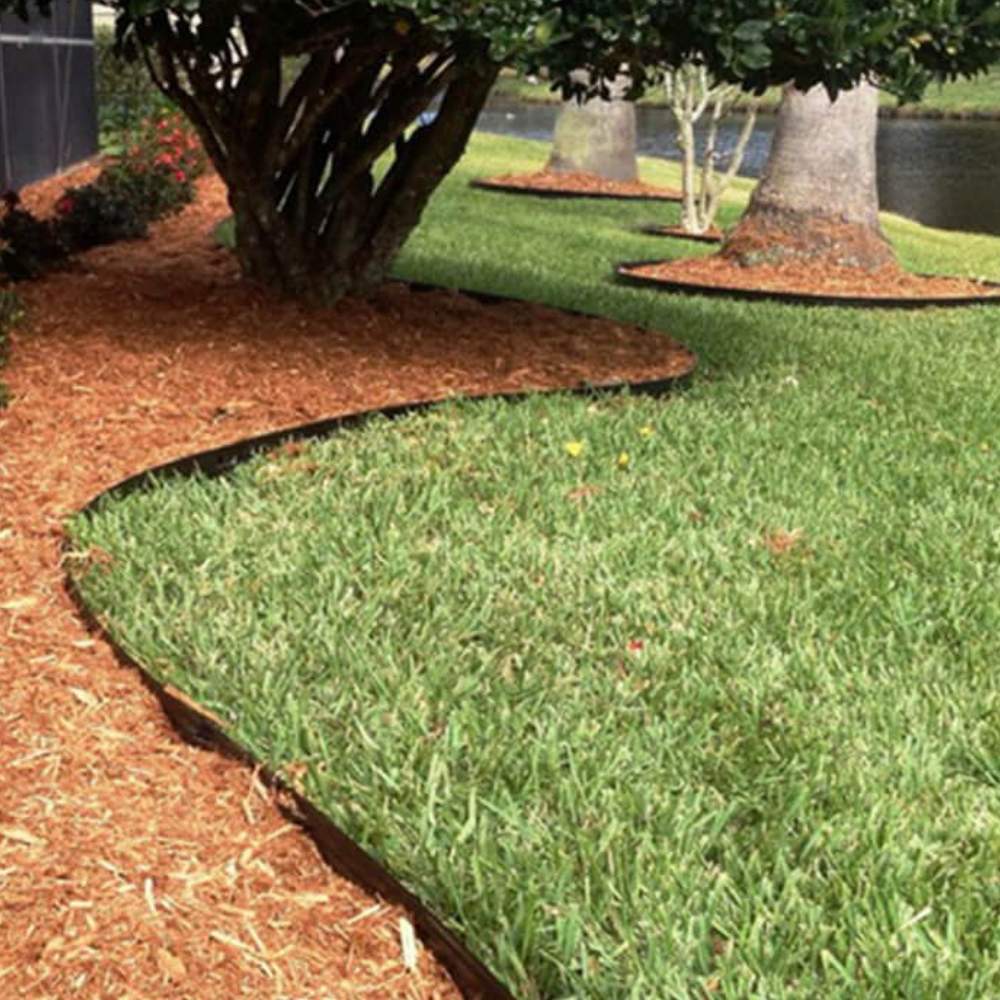 Cor-ten steel landscape edging is an important, but often overlooked, part of landscape design that will improve any property’s curb appeal.

While simply acting as a separator of two different areas, rusting metal garden edging is considered a design secret of professional landscapers. The corten lawn edging keeps plants and garden materials in place.

It also separates grass and pathways to give off a clean-cut and organised look that makes rusted garden edging visually appealing.

Place the edging around raised flower beds, trees, and gardens and use a hammer to drive the spiked edging into place for a secure, long lasting border
Z

Effective at defining and separating the different areas of the garden. It holds fast in all soils, keeps a perfect straight line and bends to virtually any shape.

The rust finish complements any existing Cor-Ten features and brings an element of history to the garden. Very effective at controlling grass runners – when 30mm of the actual edge as well as the spikes is hammered into the ground it creates an effective barrier that will stop the runners invading paths or garden beds.

For shorter lengths, simply measure out the amount needed for your project

Rusted garden edging can be made of bare cold rolled steel or Corten steel. The steel used for our lawn edging is made of strong, long lasting, and durable Corten/A606-4 Steel.

Corten steel has a significantly longer lifespan than bare cold rolled steel. It will hold its shape and not bend under pressure.

The beautiful rustic finish of Corten Landscape Edging and Stakes will allow it to seamlessly blend into many different landscape styles.

What is Weathering Steel (Corten Steel)?

Weathering steel, best-known under COR-TEN steel and sometimes written without the hyphen as “Corten steel”, is a group of steel alloys which were developed to eliminate the need for painting, and form a stable rust-like appearance if exposed to the weather for several years.

“Weathering” means that due to their chemical compositions, these steels exhibit increased resistance to atmospheric corrosion compared to other steels.

This is because the steel forms a protective layer on its surface under the influence of the weather. The corrosion-retarding effect of the protective layer is produced by the particular distribution and concentration of alloying elements in it.

The layer protecting the surface develops and regenerates continuously when subjected to the influence of the weather. In other words, the steel is allowed to rust in order to form the ‘protective’ coating. 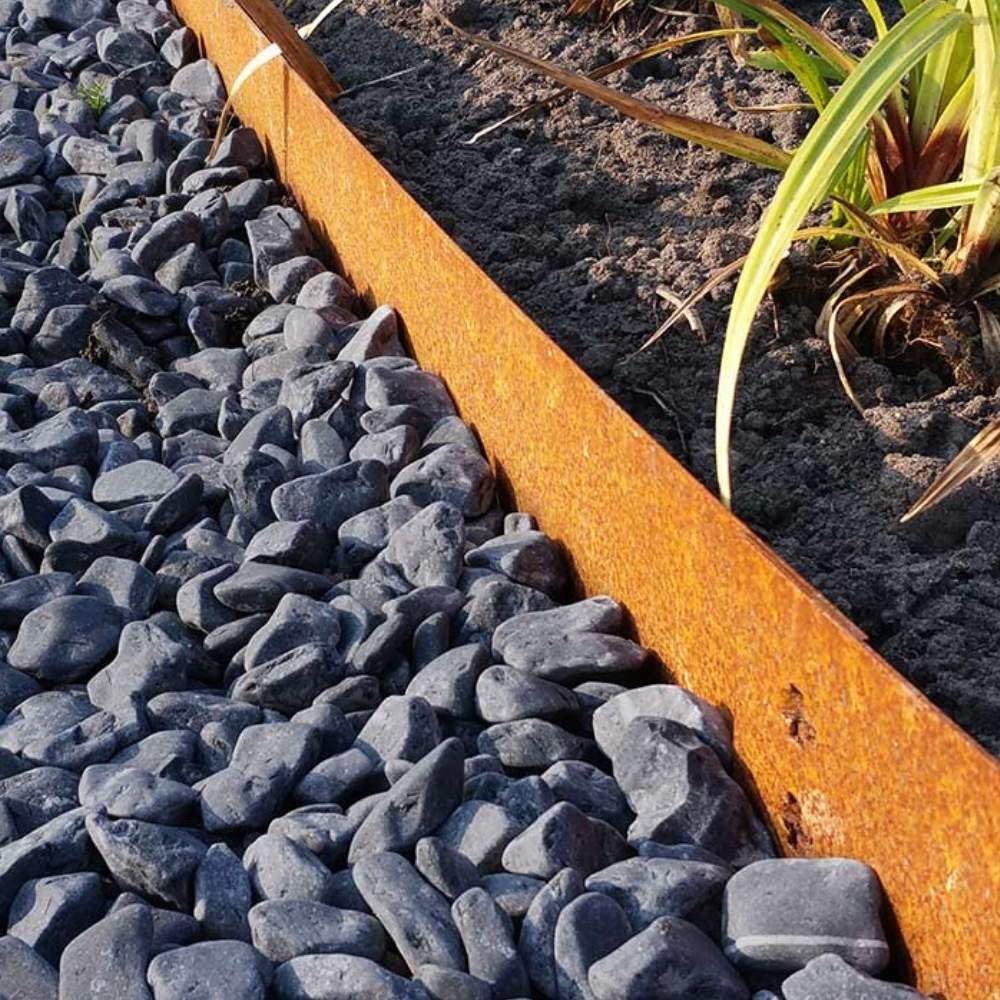 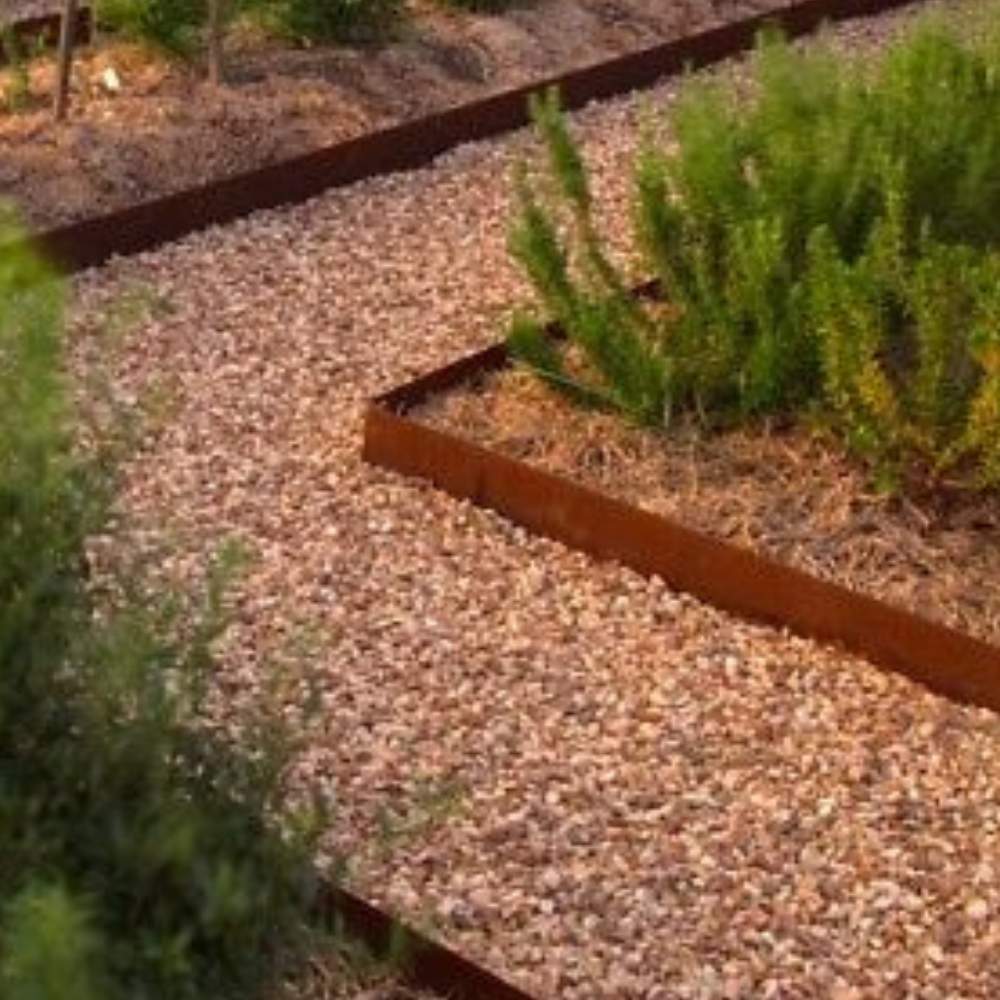 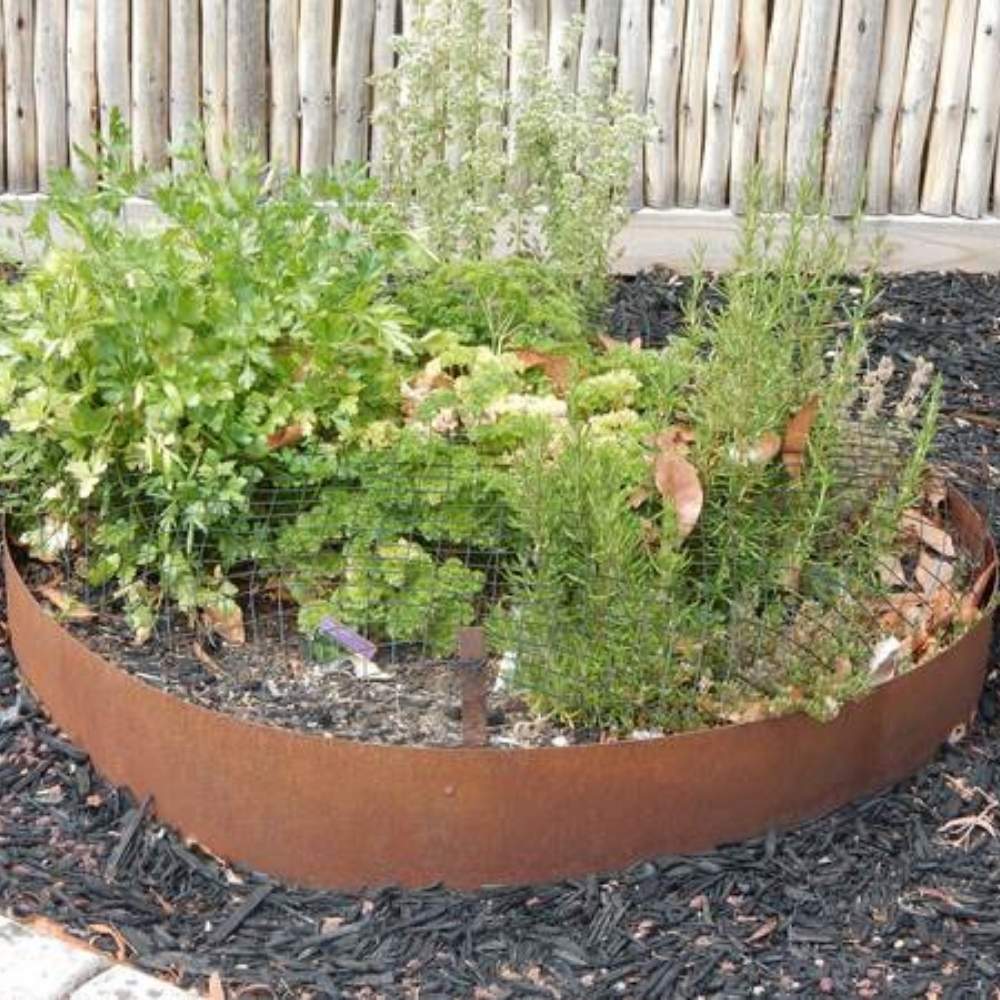 Which payment methods are accepted?

We currently only accept credit card payments, PayPal & Crypto currency. More payment methods will be added in the future.

What currency are the prices displayed in?

All of our prices are displayed in £GBP.

What are your delivery options and how long will it take?

OUR DELIVERY PARTNERS INCLUDE

Do I get a receipt for my order?

You will be sent a receipt for your order by email after payment is made. You will also receive a confirmation email with a tracking number once your item has been shipped.

Do you have a shop location?

We are a “online supplier”, with no physical shop or premises. In this way, we are able to pass our considerable savings directly to you.

Are your products new or second hand?

All of our products are brand new! We sell end of line, excess stock and deleted lines from some of the largest wholesalers at a fraction of the price!

Do your products come with warranty?

Unless otherwise stated all items purchased from Clearance Warehouse come with a standard consumer warranty.

Can I return my item?

We will gladly Refund or Exchange an item if:

You may not be entitled to a Refund or Exchange if:

Note that measurements quoted on our website and affiliated sites and social media channels are subject to slight variances, when purchasing items measure all items to ensure they fit your space.

How do I know if my order has been shipped?

Once your order is shipped, it will be marked as complete in our database and you will receive a confirmation email with a tracking number.

I haven't received my order yet! Is it lost?

If you have any concerns with your order, please contact our support team by email and they will be glad to assist you. Most emails are answered within 1 business day.

Have A Question Before Buying?

Can the ends where they clip together then be bent to make a square?

You can bend the edging to form a corner. It is easier, however to bend the middle of a section as opposed to closer the the end.

Can you cut it if you don't need all of one piece?

Yes, it can be cut with a hacksaw or grinder.

Will the rust colour bleed onto the white garden gravel?

No, there is no colour run off during the 5 weeks rusting period or after that. White gravel or white pavers will not become stained.

Will the steel rust away to a pile of flakes?

Cor-Ten is much more stable than normal steel. The rusting process only takes place on the outside thus protecting the steel on the inside.

What happens if something scrapes off the rust finish?

If the Cor-Ten does receive a scratch so that the inner silver steel is exposed, it will just rust in the same 5 week period and the scratch will be sealed over.

There are no reviews yet.